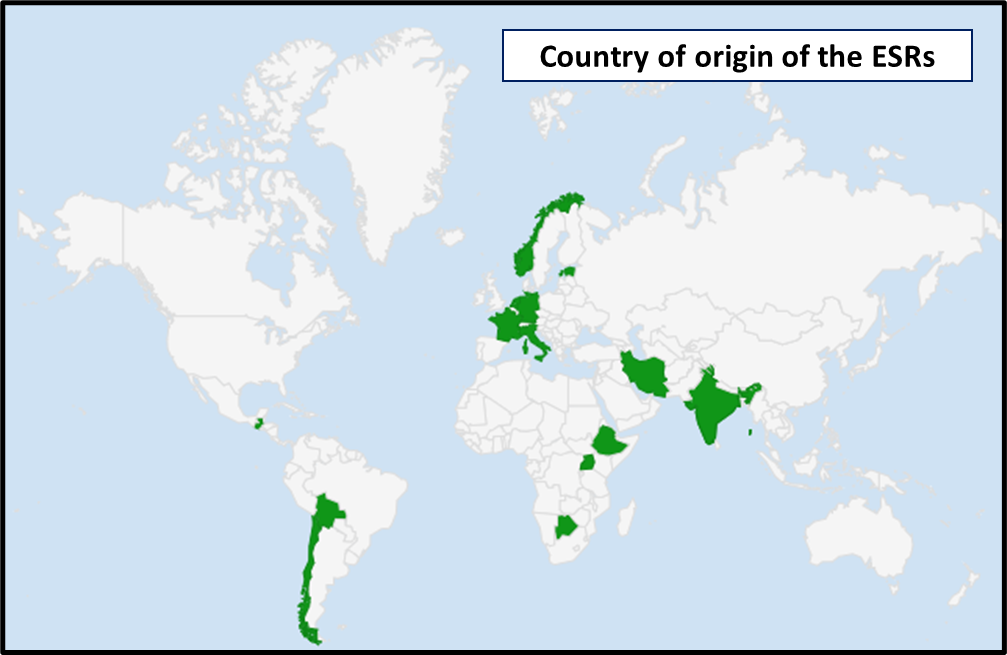 A multitude of diversity dimensions impact research, and it is therefore important that these are clearly discussed and incorporated in the training of young scientists as early as possible. The inventWater project being a model progressive Early-Stage Researcher (ESR) training program, it was paramount that the ESRs were introduced to the topic. During the June 2022 training week in Dundalk, Ireland, the ESRs were presented with the common diversity dimensions in research and at workplaces. Each ESR was, after that, tasked to identify at least one diversity dimension that may impact their research projects.

Firstly, before we outline the diversity of the responses, we highlight how diverse the inventWater ESR team is. In terms of gender, it is an almost equal split of the 15 ESRs – eight female and seven male – with an age range of 23 – 33, and modal age of 26.

The team is diverse in terms of nationalities and professional background as well. The ESRs come from 14 different countries, spread across 5 continents. All ESRs have moved to a new country for their projects and are now hosted by 8 European countries. The majority of them come from an engineering background, but there are biology, ecology, and water quality experts too.

Next, we highlight the diversity dimensions identified most by the ESRs after the training week.

Ten of the 15 ESRs mentioned socio-economic diversity in their responses in different but related ways. Several ESRs noted that developing countries lack the capacity (resources and economic) to tackle, global problems such as deteriorating water quality as, opposed to the developed countries (ESR 4, ESR 7, ESR 9, ESR10). This is in most cases compounded by socio-political hardships, for example in such countries, the most vulnerable are not invited (don’t participate) in decision-making processes (ESR 10, 14).

The other socio-economic imbalance mentioned was that developed countries are the main contributors to the causes of global water challenges/problems such as greenhouse gas emissions, overproduction, and consumption of high-water demanding products. Unfortunately, the aftereffects of such affect developing countries the most (ESR2).

The lack or shortage of data in some countries which is either due to a lack of capacity to collect the data or due to unfavourable political conditions/regimes is the other challenge that was raised (ESR11). This does not only make these countries lag behind in research and knowledge production but also in capacity building. Hence, these countries are always less prepared in addressing water challenges.

Next to the socio-economic dimension, gender diversity was equally cited by many of the ESRs. More than 50% of the ESRs mentioned the role of gender diversity in their projects from various perspectives. Undoubtedly, there is a strong connection between socio-economic status and gender equality in various communities around the world. In developed countries, human rights are more respected with a less gender-biased attitude in comparison to developing countries.

Generally, gender distribution among water users, academics, and stakeholders was considered the most (ESR 3, ESR5, ESR6, ESR8, ESR14). The ESRs

examined gender diversity in their respective host institutions by considering the composition of the supervisory boards, the number of PhD students, and the composition of the main research community in their departments. Although some ESRs are pleased with the gender split, there is generally a need for improvement in gender equality in the scientific community. This could be achieved through more admission, training, and support for female scientists. Obviously, gender inequality amongst decision-makers in the water sector is a probable cause of gender inequality in the water science field.

The ESRs also noted that improvement in water quality and accessibility to safe water are two key factors in achieving gender balance in the water field (ESR 6, ESR 7, ESR 8, ESR 9). This is because historically women are the main providers of clean water for domestic use, and they are also more concerned about sustainability and efficiency in water usage processes. ESR12 uniquely pointed out the unequal gender distribution of fishery participants in both occupation opportunities and leisure activities in his project.