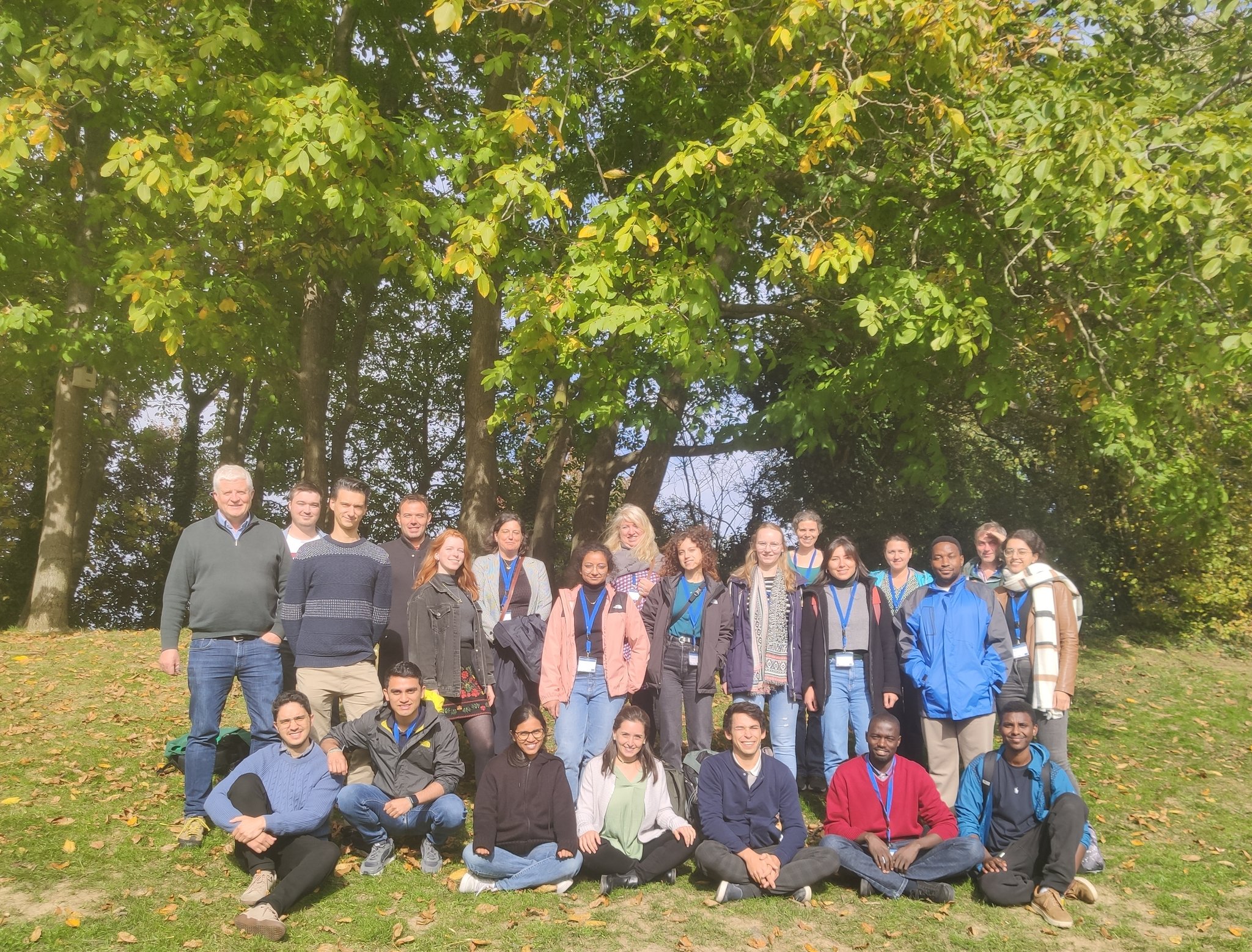 The third InventWater training week “Modelling water quality under global change” commenced at the Vrije Universiteit Brussel (VUB), nestled in Brussels in the heart of the EU. The week provided a second opportunity to meet in person, which helped foster the feeling of community whilst being immersed in a week packed with technical training that covered models including: Community Land Model (CLM); Soil and Water Assessment Tool (SWAT+); LakeEnsemblR; Model to Assess River Inputs of Nutrients to seAs (MARINA); and WorldQual. The week gave a great overview of the different kinds of models that can be used to answer complex and interdisciplinary research questions about water (both quantity and quality), which is a topic that many of the ESRs are faced with. The overarching message that echoed throughout the week was that “all models are wrong, but some are useful”.

The week was kicked off at Perché rooftop bar, which provided a beautiful setting to watch the sunset over the city whilst the ESRs caught up over an aperol spritz in preparation for the intense and demanding programme of training that was to come.

The first and second day of training gave an introduction to CLM and SWAT+, from which the takeaway message ”everything should be made as simple as possible, but not simpler” resonated with the ESRs. The CLM training was led by Sabin Taranu and Steven Herzog, who delved into how the model can be used to quantify how natural and human changes in vegetation affect climate and vice versa. The students had the exciting chance to run their own simulations on the VUB HPC (high-performance computing) computer and explore how a world without irrigation or without photosynthesis could affect a myriad of variables, such as evapotranspiration.

Following this, an introduction to SWAT+ was provided by Albert Nkwasa and Professor Ann van Griensven from VUB, with an engaging presentation from one of SWAT’s developers, Dr Katrin Bieger. The ESRs had the opportunity to practically apply this river basin management tool, running a simulation for water quantity and quality in the Robit-Data watershed in the Upper Blue Nile basin of Ethiopia. Additionally, the importance of understanding uncertainty within models, parameters, and inputs was addressed, with everyone being reminded to always consider the balance between minimum complexity and maximum simplicity within models.

After such a gruelling day studying CLM and SWAT models, it was time to shake it off. The ESRs had a blast at the Space Laser tag game, with first timers dying the most, and others prowling like predators. All this fun made the students crave food, and so after the entertaining game, the ESRs had a scrumptious dinner at an amazing Thai restaurant Sukhothai. ESRs were all done for the day and looking forward to another day of intense training sessions.

The third day of the training week was not short of exciting learning opportunities. The day started off with a presentation by VITO’s Dr. Ils Reusen on their work developing an open source water quality platform, which could be useful for ESRs’ projects. The team from the Helmholtz Centre for Environmental Research, Drs. Tom Shatwell and Karsten Rinke, then gave an interesting introduction to Lake Modeling through an informative lecture and a hands on tutorial of the LakeEnsemblR package, which combines five hydrodynamic lake models and runs in one R script. The takeaway from the training session was that using the average of an ensemble of models was better suited at simulating the lake dynamics. The ESRs shifted gear in the afternoon from the morning’s lake session to learning of modelling tools on the catchment scale. Dr Maryna Strokal, of Wageningen University, led the session introducing the MARINA model, which she developed. Apart from nutrients, ESRs learnt that the model also simulated plastics, multiple pollutants, and antibiotics. The ESRs were guided through the process of setting up and running the model, using the Pearl River in China as a study case, under multiple scenarios.

Keeping with tradition, the team had a group dinner at Le Falstaff where they tried Belgian cuisine, including the crowd pleasing dish Américain préparé. Apart from great conversations at the table, some in the group were brave enough to sing songs from their home countries. But the highlight of the dinner was the group getting to sing happy birthday to Ammanuel! To cap off the night a few of the ESRs explored the Brussels dancing scene, with great company from Drs. Phil McGinnity and Rafa Marcé.

On the fourth day of the training week ESRs further explored water quality models and the UN Sustainable Development Goals (SDGs), ensuing with an exciting and interesting nexus modelling exercise afterwards. During the day, the ESRs learned about watershed export models such as WaterQual, which focused on nutrient loading transport. The water quality training was provided by Professor Hans Dürr, based at Ruhr-Universität Bochum. The session gave insights into different types of nutrient export models, and their governing biogeochemical equations. The ESRs had a chance to deepen their knowledge of different aspects of water quality, such as eutrophication, nitrogen and phosphorus cycles, as well as the water quality modelling framework as demonstrated by the Elbe river case study.

The second half of the day was all about the UN SDGs, and ESRs worked on integrating the models explored in the previous week to address the water-energy-food nexus, which provides a framework to consider the interlinkages and interdependencies between natural resources. This session was given by Professor Maryna Strokal, Dr. Ting Tang, and ESR Annika Schlemm. During the model integration exercise, students had the opportunity to consider the importance and representation of various spatial and temporal scales, water quality variables, and links with the SDGs. Finally, the day ended with an interactive 30 minute modelling exercise and 1 minute group presentation of their respective nexus models.

It’s fair to say that the training week was a huge success. The ESRs were imparted with knowledge on various modelling tools from highly skilled teachers and were exposed to their hands-on application. Furthermore, the participants enjoyed a week of socialising within the inventWater group, and thus fostered stronger ties among the ESRs.